Antivirus Panda Free is a free antivirus for computers running the Windows operating system. This is a "cloud" antivirus. This means that it uses an anti-virus database that is located on remote servers and is updated regularly in real time.
This is the advantage of cloud technology. But there is a drawback, it lies in the fact that the antivirus does not work 100% when the computer is not connected to the Internet. Without the connection, the computer does not remain completely defenseless, but it loses its effectiveness due to the incomplete offline anti-virus database. 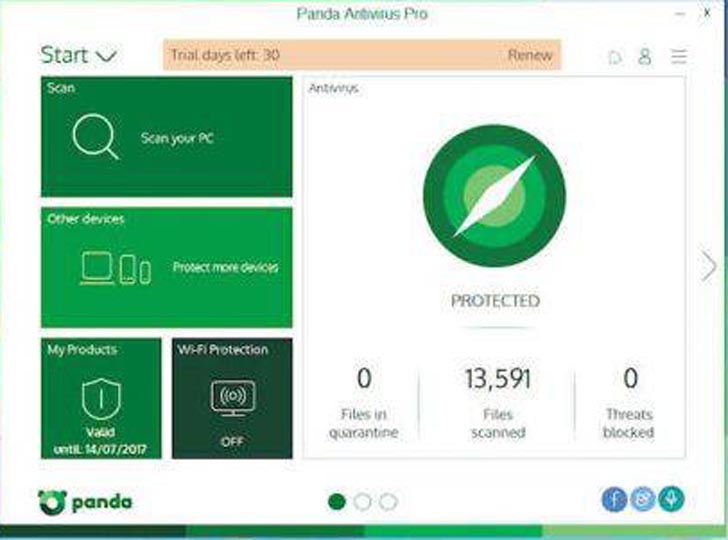 What will the user who downloads the latest version of Panda antivirus face? Let's start with the installation step. Experienced users know that you need to be attentive to checkboxes. The first tick suggests installing a web antivirus. We leave it. The other two are recommended to be removed. Otherwise, they will install their own browser and make the Panda Antivirus home page the default page. Now go to the interface. Each time you open the main screen of the Panda antivirus, you will be prompted to create an account. You can follow the instructions, but you can skip this step, it is not necessary. You probably pay attention to the smile with a wish for a nice day with a smile. Perhaps this adds to the antivirus "human face", but does not add seriousness to this program. The first thing that users of old computers that download Panda Antivirus will notice is the lack of friezes and suspensions of the system. In the standby mode, the Panda antivirus consumes no more than 50 MB of RAM. It works great on computers that are more than 10 years old. Owners of more powerful machines will not even notice changes in the performance of the computer after installing the latest version of the antivirus on Windows. The main strength of the free version of the Panda antivirus is a file antivirus, supplemented with behavior blockers and behavioral analysis. Together, these modules are excellent at coping with the majority of malicious programs. Behavioral analysis is good because it analyzes the activity of the launched applications and blocks them if the behavior of the program resembles the behavior of malicious code and can threaten the security of the system. The latest version of Panda Free has a USB antivirus - scans connected flash drives and other removable media. Blocks suspicious files and autorun. Monitoring processes is another technology that is included in the free antivirus package. It works as follows: it checks all processes on Windows, sends them to their cloud servers, compares them with the database, determines the rating of processes. If a process with a low rating is identified, the process will be stopped. Instead of web antivirus, a free version of Panda offers a link filter. This component of the antivirus does not work as an extension for the browser, but as a Windows service. This means that it will work on any browser. It will only block those sites that already exist in the database. Will not protect against new threats. Of the advantages of Panda Free Antivirus, experts note the high efficiency of file antivirus and proactive protection. This free antivirus protects against "future viruses" through behavioral analysis. Antivirus is well optimized and will work even on Windows XP. The disadvantages include the need for the internet connection. This is natural, because Panda is positioned precisely as a "cloud antivirus." Tests have shown that the free version of the antivirus does not protect against keyloggers.