AVG Antivirus Free is a free antivirus software made by the Czech company AVG Technologies. Free AVG antivirus has a very impressive functionality. As for the overall feedbacks from users, the free AVG antivirus keeps in the top five rank.
In addition to good enough security indicators, AVG Free does not require a powerful computer and consumes a minimum of processing power and energy. Of course, when you first start checking files will require a certain amount of hardware capacity. 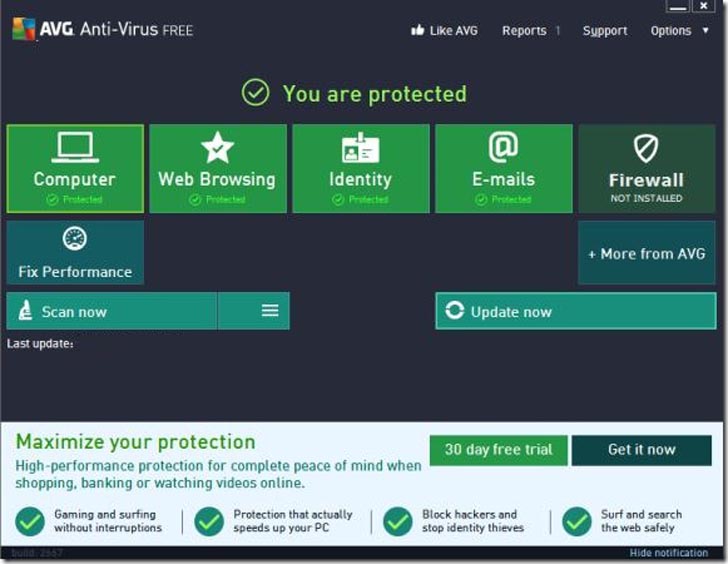 The latest version of the free AVG antivirus offers the following security components: File antivirus, mail antivirus, web antivirus and of course, a cherry on the cake was a software antivirus. The last component plays in favor of choosing this antivirus and encourages users to download AVG antivirus for free. File Anti-Virus scans files that fall on the user's computer, are being executed or modified. It determines whether these files contain suspicious scripts and other threats. It is noteworthy that the free AVG antivirus has a set of technologies for scanning files, which analyzes files both on the user's computer and on their own servers. According to the developer, the algorithm itself chooses which technology to use and this increases the degree of protection. Email antivirus will protect you from both malicious links in incoming messages and from suspicious attachments to emails. In addition, the antivirus will block the sending of "infected" emails from your mail. This is useful if access to your account has been compromised and someone on your behalf sends out emails with malicious links. Web antivirus analyzes all traffic that passes through your browser. It blocks suspicious files and sites that host code that threatens the security of your system. Web antivirus in free AVG also prohibits visiting websites that are located in the database of phishing sites, or similar to phishing sites. But it does not guarantee 100% that all phishing sites will be blocked. Program antivirus scans programs that are executed on the computer in real time and in case of suspicious activity, blocks them. It can be programs that remember passwords, make screenshots of the desktop, intercept the clipboard and so on. Undoubtedly, the presence of such an option in the latest version of the free AVG antivirus is a plus. For example, in the free version of Kaspersky there is no such tool. But conducted studies show that the degree of reliability of this component in the free AVG leaves much to be desired. In the paid version, things are better, but we will not consider it. The general impression of AVG Antivirus Free is well suited for a computer that has not been infected with viruses and will protect the system from threats while observing caution with files and providing personal data on the Internet.