The free browser Vivaldi looks similar to Opera. And this is not strange, because they have "one parent." In 2015, the Opera development team separated and began work on its own browser.
A bit of history, until 2015, the Opera team developed its own engine. There were both advantages and disadvantages. Especially brightly manifested themselves disadvantages. On the old Opera, web pages and functions could be displayed and work differently than on Chrome or Mozilla Firefox. In addition, the support of its own engine required considerable strength programmers. Of the benefits, there is a strong community of enthusiasts who have made efforts to improve the browser. In 2015, it was decided to switch to the Chromium engine, and close the community. Part of the team took this decision as a challenge to create their own free browser and called it Vivaldi. 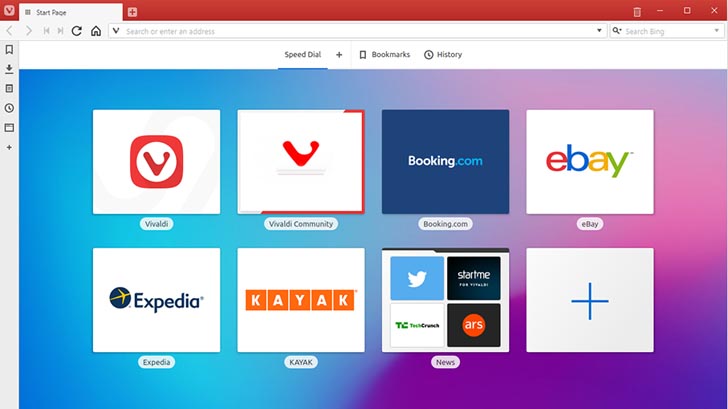 Contrary to expectations, the free browser Vivaldi works on the same Chromium, but it looks more like Opera version 12 than like its latest version. The developers believe that the interface and functionality is much more important than what is under the shell. The main idea of ​​Vivaldi’s browser is to preserve the look and functionality of the good old Opera and outperform the “big brother”. If we talk about the speed of the latest version of Vivaldi, it is not much different from other browsers on the same engine. Is it good or bad? Rather good, since most modern browsers are made on the same engine and work about the same. The user can download the browser that meets his needs more without sacrificing performance. Download Vivaldi for free - means to get a not very popular, but stylish and customizable browser. Let's take a closer look at what features get who installed the latest version of Vivaldi browser? The developers of Vivaldi paid special attention to working with the browsing history. Unlike most competitors, it displays not only a boring list of visited sites, but also statistics with colorful graphs. Fans of the Vivaldi browser will get handy notes. When you find an interesting article or phrase on a website, it’s enough to add it to your notes. The browser will save not only the link to the page, but also its screenshot. This is useful when the page is no longer accessible or the content of the page changes. The latest version of Vivaldi supports customizable keyboard shortcuts and mouse gestures. This is not the most popular feature, but when you get used to it, it's hard to refuse. As for the graphic design, the designers came up with creative. Initially, Vivaldi’s browser offers to choose one of 17 color themes. These are the colors in which the legendary Porche 911 was produced. If the desired color was not found, it does not matter, you can choose your own color manually. It is also an interesting feature of the browser - the command line. By enabling the command line, the user can quickly navigate through tabs, notes, and downloaded files. It will be useful for fans to open a lot of tabs and those who work on a laptop and do not use the mouse. Type the name of the tab in the search line is easier than finding it among dozens of others. Vivaldi was not left without a sidebar, so familiar to Opera fans. Vivaldi Sidebar allows you to work with downloads, bookmarks and the most interesting, open a web site in this panel. It looks like a small narrow browser window to the left or right of the main window. It is convenient for social networks and instant messengers. There is no need to switch between tabs in order to check if there is a new message or write a message to a friend. The disadvantages of the browser Vivaldi is the lack of synchronization, which complicates the transition to it from other browsers. The latest version of Vivaldi doesn't have lots of its own extensions, but it is almost completely compatible with extensions for Google Chrome.

Other software from browser category: