Free anti-virus Avira is a product of German developers, the "younger brother" of the paid version of Avira, which has proved itself in the world market. It is characterized by high reliability and smooth operation.
The latest version of the Avira antivirus showed high results in detecting malicious programs, while the antivirus algorithms practically exclude false triggering. This is when the antivirus blocks a file that is not really a virus. These tests were conducted by independent experts and characterize only the property of the scanner. Tests do not take into account other characteristics of free antivirus software, such as interface, speed and consumption of computer processing power. 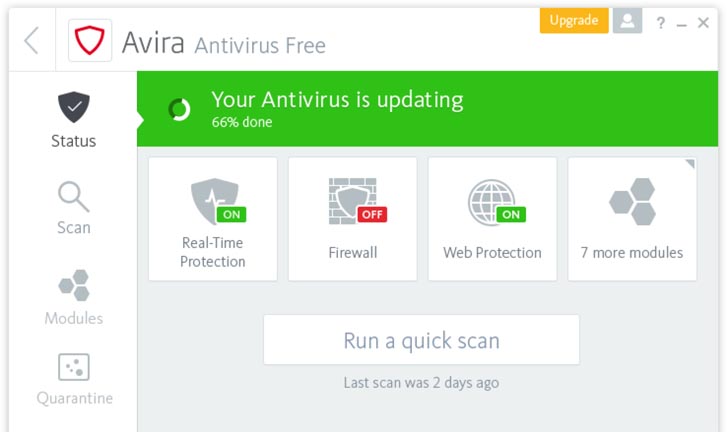 What will get the users who decided to download the Avira antivirus for free? First of all, it's a file antivirus. It consists of two components - checking files that are stored on the hard disk and checking opening or running files. In some antiviruses, these components are presented as separate tools. Their unification looks logical, although at first glance, it reduces the attractiveness of free Avira in comparison with competitors. To protect against Internet threats, free anti-virus Avira offers to install the extension to the browser. The extension works only for Chrome (and browsers that support installing extensions from Chrome store) and Firefox. This extension is completely free, it will block web pages, as well as links to pages that are in the database of suspicious sites. Those who have already downloaded Avira Free, note the rather slow operation of the antivirus. Scanning files on the computer takes several hours, during the scan, there is a slowdown of the computers on Windows. In addition, when you scan again, the time for checking the files is almost not reduced. During the scan of removable media, it is noted that the Avira for Windows easily copes with the detection of infected files and viruses. But the speed of the antivirus is not impressive. Summing up, we can say that to download a free anti-virus Avira for Windows - means to get a reliable file antivirus that will detect threats with a high probability. But at the same time you need to be patient. In terms of protection when working in the browser, Avira offers a free extension, but only for two popular browsers: Chrome and Firefox. As for the firewall, the free Avira antivirus allows you to configure the already built-in Windows Firewall, but in a different interface. Many find this a convenient addition to the free antivirus.