Bitdefender Antivirus Free Edition is a free antivirus solution from the Romanian development team. The latest version of BitDefender is pleased users with an updated interface and the implementation of new protection technologies, even in the free version.
Bitdefender Antivirus is completely free, but requires registration. For registration only the name and email are required, while confirming email is not necessary, so this is more a formality. 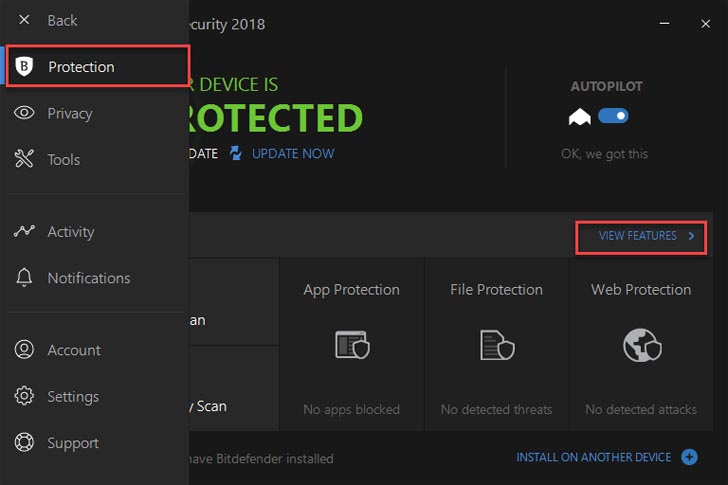 For those who are going to download a free BitDefender antivirus, it will be useful to know about the minimum system requirements. The latest version of Bitdefender Antivirus Free Edition runs on computers with the installed operating system Windows 7 and higher. The recommended amount of RAM is 1.5 gigabytes. If there is less RAM on your old computer or laptop, a message will appear when installing it. It's nice that you can press the "skip" button and the installation will continue. The anti-virus will work, possibly even without crashing. It depends on the configuration of the system. As for real memory consumed, Bitdefender antivirus usually does not consume more than 150 MB. In comparison with other free antiviruses, BitDefender can be called a record holder for the memory needed for work. But despite this, the antivirus works quickly. This is realized due to the fact that there are more calls to RAM, but fewer calls to the hard disk. RAM is faster than ROM, and this provides high performance. For computers with a deficit of RAM, Bitdefender Antivirus is not the best choice. But on modern computers Bitdefender works almost imperceptibly. The latest version of Bitdefender Antivirus works on the "install and forget" principle. Only sometimes, when threats are detected and updated, a notification about this pops up in the taskbar at the bottom. By the way you can turn off notifications. Then the antivirus will work in completely "inconspicuous mode." Filling in a free antivirus BitDefender includes a standard file antivirus, web antivirus and behavior antivirus. The first checks the files that are created or modified on the computer. The second, web antivirus, protects the user from suspicious sites. Bitdefender Antivirus has a good base of phishing and malicious sites, independent tests show that the Romanian antivirus copes better than most free analogs. Antivirus behavior scans programs running on Windows and blocks them if the behavior of the program falls under the pattern of potentially suspicious software. A positive feature of the free BitDefender is the caching of previously validated files. This saves the resources of the user's computer on subsequent scans.