Comodo Internet Security is a free antivirus for computers and laptops running the Windows operating system. It was developed by American specialists, it and completely translated into many languages.
The first thing that a user who wants to install a free Comodo antivirus will encounter, is the selection of the components of the anti-virus protection. You can choose from a Firewall, a technical support client, a proprietary browser and protection of purchases on the Internet. Customer support can be safely turned off, because we have a free version and technical support will be off. If you are not sure that you need another browser, you can also remove the tick in front of it. 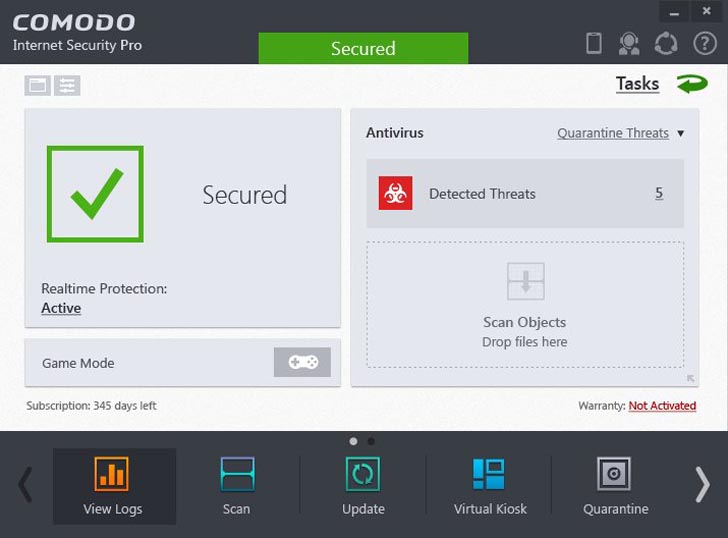 To install the antivirus Comodo for free, you need to select a free version in the installer. The minimum paid version differs from free one only by the availability of technical support. Most users do not use technical support, so the free version looks like a very good solution for most users. After Comodo Internet Security is downloaded, the computer will need to be rebooted. Immediately after the reboot, the anti-virus database will be updated. It will take time and load the processor, but it is necessary that the free antivirus Comodo gets the latest on the current day base. Further updates will take less time, besides, in the settings you can select several priorities for updating. There are only 4 of them. At a high priority, the update will occur immediately, but it will load the processor as much as possible. Needless to say, the rest of the program at this time is best not to use. Updates in the background will use the minimum power of the computer or laptop, but will swing slowly. If we talk about the interface Comodo Internet Security, it can not be called intuitively understandable. It has many different settings. You can even change the appearance - a number of themes are suggested. Perhaps the developers assumed that the user will often change the settings, which even made a few themes. It also has quite a lots of security settings and each user can configure the antivirus for themselves. In fact, most people use the default settings. What is under the hood of the latest version of the Comodo Security Internet Security, in addition to the beautiful shell? Of course, this is a file antivirus - must have any antivirus software; Firewall, which is better than the standard Windows firewall; Sandbox that works in automatic mode. Suspicious and unfamiliar files are primarily tested in a virtual sandbox environment. This will block the infected file without damaging the system. HIPS and Viruscope are elements of proactive protection using the latest developments of Comodo. It is noteworthy that there is an opportunity to return the changes that were made by the antivirus. Traffic filter - will not allow you to visit sites that are listed as suspicious or potentially dangerous. In Comodo Internet Security, you can add sites to the "black list" manually. This feature can be used as a "parental control". Secure purchases - protects your card data while paying by card on the Internet. In addition, it protects against keyloggers, and spyware, which make screenshots of the screen. Why do many users prefer to download Comodo Internet Security? In this free antivirus, there is a good protection of online purchases and low requirements for hardware. And advanced users can adapt the antivirus to themselves thanks to the flexibility of the settings.