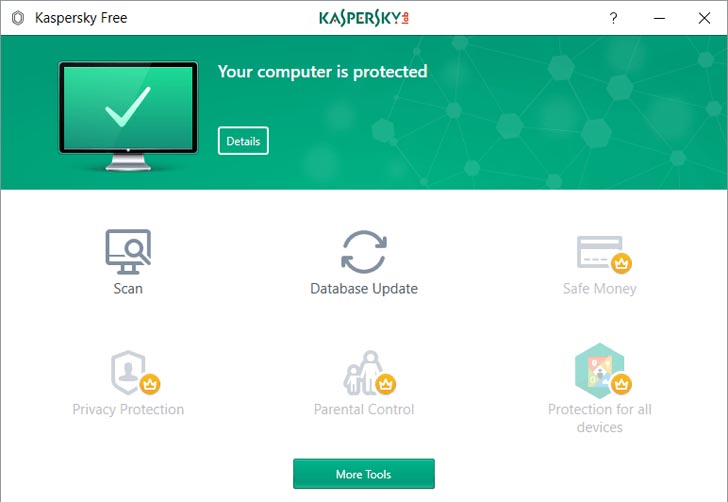 The latest version of Kaspersky Anti-Virus for Windows has a user friendly modern design in the flat material style. The interface is not overloaded with unnecessary elements and is intuitive. The main focus in Kaspersky Free Antivirus is aimed at the main source of today's threats - to work with the Internet. After all, most of the viruses, Trojans, cryptographers and other malicious software gets to unprotected users' computers through files sent by e-mail and downloaded on unverified sites. Web antivirus, email antivirus and a file antivirus are included in a free version of the product. Antivirus itself ensures that the latest version of the virus database is installed and takes care of its own security. Due to the fact that only basic modules are included in the free version, the free Kaspersky Anti-Virus has been made easier and works faster than the paid version. Especially it is noticeable on old computers. Functions of Kaspersky Antivirus Free: File Anti-Virus - any file that will be downloaded to your computer will be scanned for threats. The same applies to the files being opened - the antivirus will make sure that the malicious code is not executed while opening the file. IM antivirus - will make sure that the messenger does not contain links to suspicious sites. Email Anti-Virus is really an important and necessary component of modern antivirus. Every day, the number of messages that users' email has been hacked and spam is being sent out is increasing. Free version of Kaspersky will protect you from dangerous files and links in emails. Checking removable media is a kind of file antivirus that is activated when a new device is connected to the computer. The era of flash drives has already passed, but this does not mean that you can forget about this source of infection of the PC. The latest version of Kaspersky Anti-Virus will not allow malware from removable disks to infect your computer.