360 Total Essential - free antivirus, developed by the Chinese company Qihoo 360 Software. It is famous for the fact that in the free version it contains "under the hood" engines of two antivirus programs: Bitdefender and Avira.
This antivirus is the "brother" of 360 Total Security, but easier and simple. So, it is more understandable for users and less stresses the system. Earlier in the light version there was no advertising but now it is in both products of 360Total Essential and 360 Total Security. 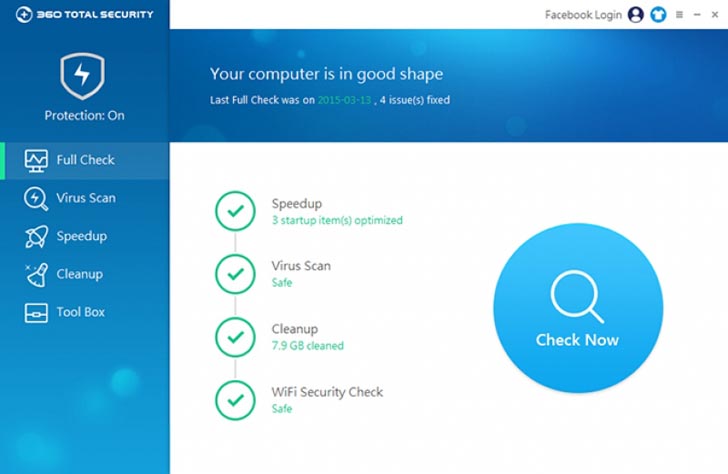 At the moment, among all free antiviruses, 360 Total Security has one of the most powerful file antivirus software. To download the latest version of 360 Total Security - means to get one of the best file system scanners that exist on the market. This is achieved by combining its own 360 cloud core and two plug-in kernels, Avira and Bitdefender. Unfortunately, this powerful protector has the downside - 360 Total Essential often recognizes innocuous files as suspicious. In the language of savvy professionals, such situations are called false positives. Another important feature of the free antivirus engine for Windows 360 Total Essential is a connection to the Internet. It would seem that today this is not a problem, but it is better to know about this before you need an antivirus on a computer without the Internet. Fortunately, this does not mean that without the Internet 360 Total Essential is hopeless. In the settings, you can download the local version of the Avira or Bitdefender antivirus software. After the download is complete, a notification will appear on the 360 ​​Total Essential screen and the antivirus will be ready to work offline. Most publications recommend downloading the Avira engine. The advantages of the antivirus from Qihoo 360 is the protection from keyloggers - programs that transmit the data entered from the keyboard to attackers and programs that take screenshots. Such protection is usually offered only in paid versions of antivirus software for Windows. Various tests indicate that the light version of the 360 ​​Total Security can boast of high speed and low requirements for the computer. So most users will not notice the slowdowns while the antivirus scans the files. The disadvantages of the free 360 ​​Total Essential antivirus for Windows can be divided into two parts: security flaws and disadvantages of the interface. If we talk about protection, 360 Total Essential can not boast of a good web antivirus. It contains few dangerous sites and notes that the antivirus does not block malicious files before they are downloaded to the computer. As for the disadvantages of the interface, it is primarily a lot of additional "thingies", which have no real relation to security. And of course very distracting advertising and constant attempts of the antivirus to "sell" the paid version. Summing up, we can say that the latest version of 360 Total Essential is well against the threats that already hit the computer, but it requires control due to a high percentage of false positives. Also, the antivirus requires some computer literacy to download the local kernel and prevent infection through the http / https protocol.