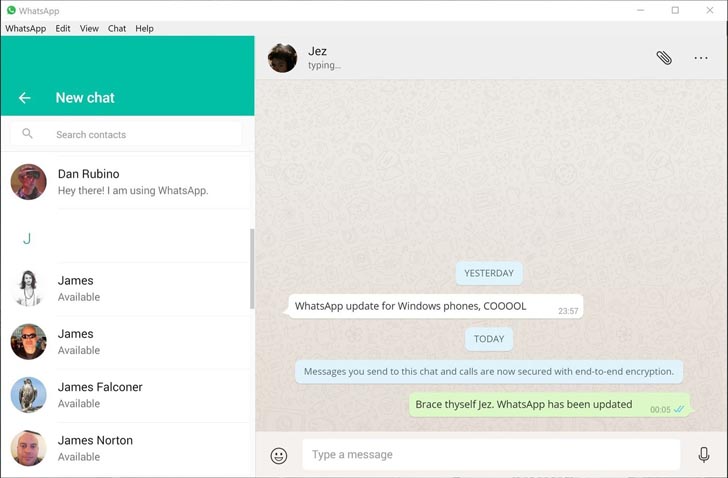 Connecting to Wi-Fi made communication almost free. By adding file transfer and video calls to the messenger, Whatsapp met the basic needs of users in the mobile messenger. As the popularity grew, more and more people needed a computer version of Whatsapp. You must agree, for a person working on a computer, it’s more convenient to communicate in the next window than every time you need to read or send a message, pick up a smartphone. Many businesses use Whatsapp to communicate with customers and partners. It is also more convenient to do on the computer. "Download the latest version of Whatsapp for PC on Windows from the official site will be able to users of Windows 8 and older. The Whatsapp versions for Windows 10, Windows 8.1 and Windows almost completely duplicate the functionality of the messenger for mobile devices. Except calls. Yes, the developers did not stop on this important component of any modern messenger in the 4G era, arguing that for them desktop devices (computers and laptops) are not in priority. " But do not be upset. The Internet community has already found a way out of this situation. Thanks to the Android emulator for Windows, the full functionality of Whatsapp can be obtained on almost any computer with Windows operating system. First, you need to download and install an Android emulator on your computer. BlueStacks is recommended. In this program, you need to log into your Google account. Now you can work with a computer, as with a mobile phone or tablet on Android. Then you can download Whatsapp in the Google app store. In order to start using, you need to enter a phone number. An SMS with a verification code will come to the phone, and after verification you will be able to use Whatsapp on a computer running Windows OS. The advantages of this method are that you can get a full Whatsapp on your computer, you can use different SIM cards and get two Whatsapp accounts, for example, for personal communication and for work, the emulated version consumes a bit of traffic, since it was originally created for the mobile Internet. The lack of an emulator is that you need to perform additional steps that can be a problem for users with little computer experience. In addition, you will not be synchronized messages on your phone and computer through the emulator.

Other software from messenger category: